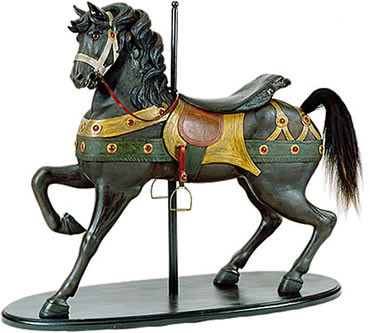 There’s been a bumper crop of acorns in Virginia this year, and while that is all together great for squirrels it isn’t so good for horses given the latter’s propensity for developing acorn poisoning from chowing down on them.

I’m not certain why horses crave acorns, being as they are mere commoners of the nut family. Perhaps they’d develop a hankering for pistachios if they fell from trees. Or perhaps, horses would devour them simply because they know instinctively that after 5,500 years of domestication, it’s their caretakers who will pay for any colic surgery. Of that I am 99 percent certain. I would venture to say I am absolutely 100 percent certain, however, that the longer I live the less certain I am of anything, least of all my small, tightly held convictions. Still, having spent a considerable part of my life surrounded by assorted horses and nuts, I cannot help but believe the notion holds some merit.

I once owned a pretty little thoroughbred with a nervous stomach and a particular fondness for the acorn’s tannin rich flesh. Fearing colic, I would trudge out to the pasture each morning, bucket in hand, picking up the fallen nuts that the squirrels should have snapped up during the night but didn’t, probably just to annoy me. But then, squirrels irk me on principle, having as they do a propensity to talk too much and say too little, much like the town gossip—always spreading the news, dishing the dirt, quick to spot any signs of trouble. Their language makes me jittery and tense.

I didn’t always harbor such antipathy for their kind. As a youngster, I’d sit in front of the television glued to the cartoon capers of  “Rocky the Flying Squirrel”, his toothy smile and cute aerial ways the architect of many a morning’s giggle. But Rocky never made his home in my attic or chewed through my electrical wiring or helicoptered his way down onto my birdfeeder from a distance of twenty feet, helping himself to the every last seed in the tray.

That’s the problem with hoarders. Nothing is ever enough. The expression “to squirrel away” probably has its origins in the boughs of their family tree, though I’m not 100 percent certain of that as the reasoning powers of anyone who regularly overdoses on Gummy Bear vitamins is probably suspect. In fact, I’m not entirely sure I’m even overdosing on them, only that by day’s end I’ve generally forgotten whether I’ve taken a vitamin earlier so I pop in another just to be sure, given my fondness for anything chewy.

My youth safely behind me, I now consider squirrels to be more bushytailed rodents than any charismatic species, fully 365 of the Sciuridae family having invaded all points of the globe save Antarctica and Australia. Fittingly enough, Washington, D.C. holds the moniker of Squirrel Capital of the World, with great numbers of squirrelly types from both the red and blue states congregating inside the public park across the street from the White House, presumably to feed off taxpayers.

When it comes to the Sciuridae family, most of us fall into two categories—the incurable romantics and those who wish it were open season on them, convinced the little spongers are best dished up fricasseed, barbecued or stewed, salt and peppered to taste.

Virginians have not one, but two seasons each year in which to hunt down the vermin, and, according to Marc Puckett, the small game wildlife biologist of the Virginia Department of Game and Inland Fisheries, fully 51,000 Virginians do so regularly. Some of them are dedicated, others are new to the sport, but I presume all are eager to rid the area of that intolerable squirrel speak.

A smaller number of hunters enlist the aid of dogs. Canines might be altogether too willing to please, but they possess an uncompromising nose for ferreting out the ugly chatter that threatens their common back porch peace. And nose to the ground, they will go trailing the intruder or winding him silently with his nose, tracking him down until he is treed

It’s all about ‘up’ when it comes to squirrel dogs. Whether it’s a Treeing Feist or a Cur dog, the good ones are able to detect the sharp, backbiting voices that disrupt the moss-laden stillness, spot the lone occupied nest in the woods, hear the faint sharpening of claws upon the bark. The best ones pick up the scent faster than a businessman trolling for streetwalkers in Vegas. Highly intelligent social animals, squirrel dogs are the eyes and ears on the ground of a tracker, bred to sneak up on game from 200 yards, unlike hounds, who openly trail.

“The fun of the sport is to watch the dogs,” said Kevin Spencer, a squirrel dog breeder out of Ashland, Ohio. The sharp eyes, the keen ears, the nose that picks up the scent, “it’s just bred into them,” he added. “The job of the hunter is to bring it out. A good dog has it in him, but you have to give him the time to develop. You can’t just chain him up and expect him to get it.”

Over his span of his career, the gentle Ohioan has made numerous squirrel dogs, taking them from pups reliant first upon their sight, then hearing, and developing them into canines that can read the scent in the air.

“Squirrel!” I yell out my command, setting both my dogs into action.

Leaping over the steps, both cover the short distance between the back door and the birdfeeder with the same fixed-purpose of two $5,000 top-of-the-line squirrelers.

I cannot help but watch with pride. As a rule, it takes two years to make a finished squirrel dog and my couch potatoes, though being mixed-breeds, are highly aware of my antipathy toward squirrels and give chase, accepting of the fact that my generosity toward God’s creatures is specific to song, not chatter. If I wanted to feed the noise, I’d buy peanuts rather than an assortment of expensive birdseed. Squirrels should know this and content themselves with the abundance of acorns on the lawn. But they do not, thus the eviction.

My cats love acorns almost as much as my dogs loathe squirrels. Of that, I’m fairly certain. How many carefree afternoons have I spent tossing a brown-capped nut to one of my felines, eager to snag a fly catch. Lou Beans, a tall rangy fellow, coils himself tightly, awaiting my throw, his green eyes narrowed inside a familiar predation. Seeing the object arching toward him, he leaps up off his haunches and bats the acorn with a well-placed paw.

In contrast, my orange and white tabby is more of an infielder than a power hitter, scampering bunny-rabbit style after any grounder that doesn’t offend her sensibilities or exceed her four-step range.

The poor humble acorn—destined to be buffeted about by others, at best ignored, winding up inside someone’s stomach, usually a horse’s provided they’re within range. Though what the genial nut lacks in longevity it makes up for in its ability to cozy up one’s thoughts to a quiet country lane or a hearty winter soup. Hardly anything bad seems possible when attached to an acorn, save colic. Autumn wouldn’t be nearly so complete without the familiar thump, kerplunk of an acorn meeting the earth—tender sojourners all, embarking upon life amid a season of closings, their journey a mirror into the very nature of hope, poised as they are to grow from seed to mighty oak.

The fact that 99 percent of them will be stripped of their skins, their fleshy guts devoured, their potent carried away by high-strung, overly acquisitive, motor-mouthed hoarders with brains the size of walnuts is just the way of things, I suppose. One learns over time that competitors are numerous in this world and the harshness of survival intrinsic to all living things, making one careful never to press another too much into assistance, everyone being equally under siege.

And yet, gazing beyond the folds of time, I can recall that leafy afternoon when I noticed my horse pawing the ground outside his run-in shed, snorting, a quizzical expression on his face as he gazed over at the water trough nearby. Closer inspection would reveal a common grey squirrel trapped inside, having been drawn to the half-filled container by his fierce August thirst.

I helped the critter out, mostly because I am trying to develop a respect for all living things and partly because the sight of anyone struggling to claw their way out of trouble all by themselves pains me, particularly when they have the good sense to keep their mouth shut. But, I confess, if I owned a .22 and that little rodent had opened his yap just once, I might have been tempted to make short work of him, just on principle. I’m not fooled by any cuteness their ilk portrays. Anyone who chatters away that much about nothing is best put out of their misery.

Of that I am one hundred percent certain.